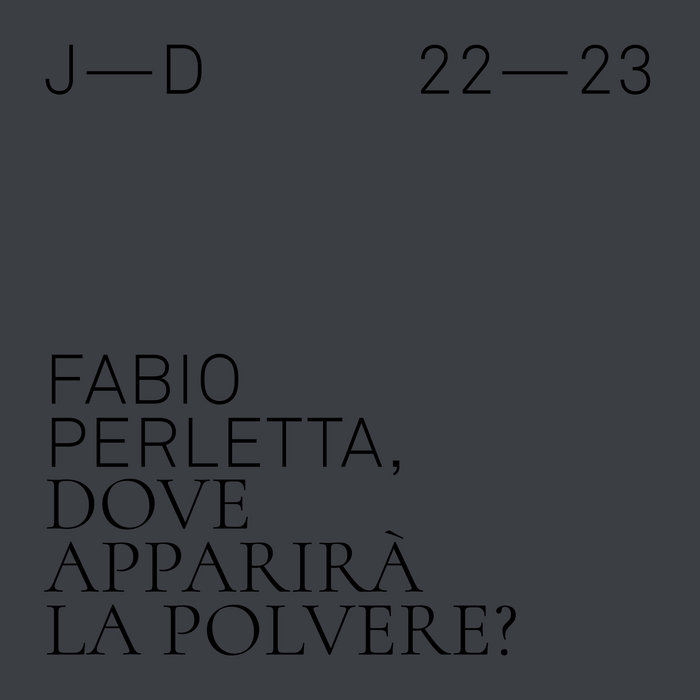 Click on each track to get the info about it + the related cover image, otherwise check the digital booklet pdf within the download folder or here: bit.ly/dalpbooklet

The sentence "Dove Apparirà La Polvere?" (English: where will the dust appear?) emerged within a text that collects thoughts and writings from a year-long residency I did at Pollinaria in 2020 for the Aequusol project.

The sentence "Dove Apparirà la Polvere?" (English: where will the dust appear?) emerged within a text that collects thoughts and writings from a year-long residency I did at Pollinaria in 2020 for the Aequusol project. The text in question, “Semi” (Seeds), is the fourth in a series of texts created for an ongoing participatory action. The words were recombined by a genetic algorithm with the specific task of introducing elements of randomness and disorder into the original sequence.

I thought of this casual fragment as a good conceptual starting point for this annual project whose goal is to document my creative process. I’ll be sharing mostly unfinished ideas, drafts, variations on un/released pieces, live recordings, improvised sessions, raw field recordings, loops and collaborations with friends on an irregular basis. I’m not sure what this project will turn into, but who knows where the dust appears?

The project is “free / pay what you want”.
Please consider donating. Thank you!

The history of the arts – especially visual arts – teaches us that a draft is never just a draft: it contains all the potential of the completed work, its official outcome as well as any other semblance that, for some reason, it couldn’t or wouldn’t take on. Halfway between a logbook and an annual balance sheet, Fabio Perletta’s latest publication recovers and confers dignity of their own to the materials that may or may not have found a place in previous works (particularly Un fiocco di neve, from 2021), and it is precisely in the heterogenesis of its discrete components that it finds a surprising stylistic unity, perhaps the most evocative synthesis of the attitude that animates his entire production.

This extensive collection of solo (or rather, solitary) recordings are the evidence of a dissimilar, non-systematic practice, which more than ever can be rightfully defined as “expressive research”: Dove apparirà la polvere? [‘Where will the dust appear?’] encapsulates in the sober poetry of its title a predisposition towards the unexpected, a constant but radically selective attention towards the minuscule sound manifestations that everyday life collects, indeed like dust, on its surface. Thus the intentional gesture, the conscious stroke of the artist will never place itself above what chance autonomously proposes, but rather will facilitate it, imitate its hidden and unsolicited dynamics, generating a happening that is only apparently lacking fulfillment but that, just like the reality it draws on, takes on meaning by way of a serene and impartial contemplation.

In approaching these fragments – as is always the case, in fact, with the 901 Editions catalogue – it is of fundamental importance to leave aside the traditional concept of music, even of sound art, and this because the same rigorous philosophical assumptions that inspire Perletta’s work lead him to clear the field of any ancillary conceptualism, leaving intact the bare essence of what the microphones have retained in specific, unrepeatable space-time circumstances. Whether it is the reverberation of a piano or an electric guitar, a stone running across a wooden plank or a metal bowl, indistinct voices resonating between the solids and voids of a building, or even an electroacoustic miniature processed in the studio – the full essence of a moment of listening, rather than of action, is immediately revealed in each iteration of the same principle: the acceptance and care of a transient instant that cannot be lost, and that through field recording finds a way to sediment and live again.

Where other artists unsuccessfully take refuge in a studied formal reductionism, in the hidden presumption that a rarefied atmosphere can make up for their lack of ideas, Fabio Perletta each time enacts a tabula rasa of his own conscious intentions and makes himself the voice of that uninduced simplicity that pertains to natural elements. For this reason the mutable fascination of these sixteen “frames” (for it would be improper to speak of pictures) is as foreign yet accessible as experimental music has to offer today, although unfortunately few allow themselves the luxury of the silence and introspection that are necessary in order to recognise it.